China Declares Crypto Scam And Illegal: It’s Officially Illegal To Trade Or Mine Crypto In China

Following Today’s News By China Central Bank! All Cryptocurrency Fall To At Least 10 To 15%. What Happens To Crypto Traders And Crypto mining Investors In China?. 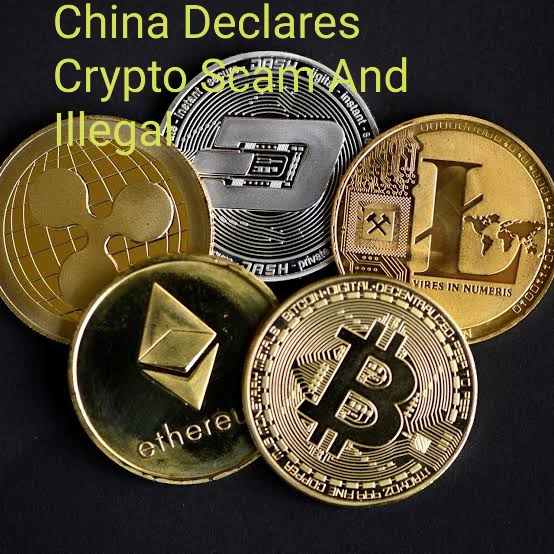 China’s central bank has announced that all transactions of crypto-currencies are illegal. This triggered the effective banning of digital tokens such as Bitcoin.

China is one of the world’s largest crypto-currency markets.

Fluctuations there often impact the global price of crypto-currencies.

It is the latest in China’s national crackdown on what it sees as a volatile; Speculative investment at best – and a way to launder money at worst.

Trading crypto-currency has officially been banned in China since 2019. However it continues online through foreign exchanges.

However, there has been a significant crackdown this year.

In May, Chinese state intuitions warned buyers. They would have no protection for continuing to trade Bitcoin and other currencies online. That as government officials vowed to increase pressure on the industry.

In June, it told banks and payment platforms to stop facilitating transactions and issued bans on “mining” the currencies. That’s the trade of using powerful computers to make new coins.

But Friday’s announcement is the clearest indication yet that China wants to shut down crypto-currency trading in all its forms.

The statement makes clear that those who are involved in “illegal financial activities” are committing a crime and will be prosecuted.

And foreign websites providing such services to Chinese citizens online is also an illegal activity, it said.

The technology at the core of many crypto-currencies. Including Bitcoin, relies on many distributed computers verifying and checking transactions on a giant shared ledger known as the blockchain.

As a reward, new “coins” are randomly awarded to those who take part in this work – known as crypto “mining“.

However with the country’s low electricity costs and cheaper computer hardware, has long been one of the world’s main centres for mining.

The activity is so popular there that gamers have sometimes blamed the industry for a global shortage of powerful graphics cards, which miners use for processing crypto-currencies.

The Chinese crackdown has already hit the mining industry.

WHAT HAPPENS TO  CRYPTO INVESTORS IN CHINA?

Yes the recent declaration of Cryptocurrency trading a scam in China today has affected all coin. Following Today’s News By China, Traders in the region might like to sell out their saved coin there by market the market unfavourable to all traders. Though these news is not the end to Crypto in China. Those in China who wish to trade crypto might go for broker that accept bitcoin deposit in foreign exchange. More-so buying and selling can still go with bitcoin and we crose our hand and see what feature unfolds for Crypto in China. Thus trade with best foreign exchange broker nsbroker. See the benefits of Investing in Cryptocurrency. As crypto-currency has officially been banned in China trade Crypto with the above recommended.